a
1
2
3
4
5
6
6
7
8
9
A
B
C
COVID TESTS
BLOOD TESTING
TRAVEL HEALTH
BOOK NOW
ONLINE SHOP
0161 543 6622
Vaccines
Destinations
Make Appointment
PRICE LIST
Pharmacy
The Chemist Live.co.uk
0161 543 6622
General
Need some help?
Email Us
Ambulance
999
NHS
111
NHS Test & Trace
119
Social
Facebook
Whatsapp
* Please be advised that we are not a 24/7 service however we will try to respond out of hours although it is not guaranteed (see the bottom of the home page for our official opening hours and address*
Usual
Opening Hours
Monday
09:00 to 17:00
Tuesday
09:00 to 17:00
Wednesday
09:00 to 17:00
Thursday
09:00 to 17:00
Friday
09:00 to 17:00
Saturday
10:00 to 14:00
Sunday
10:00 to 14:00
Holiday
Opening Hours
Our opening hours may vary from branch to branch. Visit our branches page to see the opening hours of your nearest branch.
See Branches
Cholera
Diphtheria
Hepatitis A
Hepatitus B
Japanese Encephalitis
Meningitis A,C,W, and Y
Polio
Rabies
Tetanus
Tick-borne Encephalitis
Typhoid
Yellow Fever
Africa
Antarctica
Asia
Australia & Pacific
Caribbean
Central America
Europe
Middle East
North America
South America
BLOGS
Keep up to date with the latest from us
Search...
The Thyroid Gland: Helping your metabolic health
Why is the thyroid gland so important?
28
Feb 2022
The Thyroid Gland: Helping your metabolic health

Where is my thyroid gland?

The thyroid gland is located at the front of the neck just below the Adam's apple (larynx). It is butterfly-shaped and consists of two lobes located either side of the windpipe (trachea). A normal thyroid gland is not usually outwardly visible or able to be felt if finger pressure is applied to the neck. 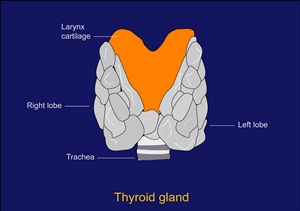 Diagram showing the location of the thyroid gland in the neck. It has two lobes and sits in front of the windpipe (trachea). The voice box (larynx) sits just above the thyroid.

What does the thyroid gland do?

The thyroid gland produces hormones that regulate the body's metabolic rate controlling heart, muscle and digestive function, brain development and bone maintenance. Its correct functioning depends on a good supply of iodine from the diet. Cells producing thyroid hormones are very specialised in extracting and absorbing iodine from the blood and incorporate it into the thyroid hormones.

Who tells the thyroid to produce and release hormones?

The signal comes from a small gland located at the bottom of our brain called the pituitary gland. The pituitary gland produces and sends out a hormone called thyroid-stimulating hormone (TSH). TSH then tells the thyroid gland how much hormones to produce and secrete. TSH levels in your blood are rising and falling depending on your body’s needs to produce more or less thyroid hormones.

There is a third actor involved in this communication. The pituitary gland responds either directly to the thyroid hormones in the blood, but it also responds to signals from the hypothalamus, which sits above the pituitary gland as part of your brain. The hypothalamus releases its own hormone thyrotropin-releasing hormone (TRH). TRH in turn stimulates the release of TSH in the pituitary, which then signals to the thyroid gland.

This whole network is also referred to as the hypothalamic-pituitary-thyroid axis (HPT) and it adapts to metabolic changes and your body’s needs.

Which hormones does my thyroid gland produce?

In addition, there are other hormone-producing cells within the thyroid gland called C-cells. These cells produce calcitonin. Calcitonin plays a role in regulating calcium and phosphate levels in the blood, which is important for your bone health and maintenance.

What could go wrong with the thyroid gland?

Normally the thyroid gland produces the exact number of hormones needed to keep your body’s metabolism running and in balance. As described earlier, hormones secreted by the pituitary gland (TSH) stay constant in your blood circulation, but their levels may increase or decrease when T4 levels in the blood are changing. This hypothalamic-pituitary-thyroid feedback loop keeps the levels of T4 in your blood stable and reacts to small changes immediately.

However, there are several disorders associated with the thyroid gland with most problems concerning the production of thyroid hormones. Either the thyroid gland produces too much hormone (called hyperthyroidism) or your thyroid doesn't produce enough hormone (called hypothyroidism), resulting in your body using energy faster or slower than it should.

What are typical symptoms of hyper- and hypothyroidism?

Symptoms for hypothyroidism is the contrary of hyperthyroidism such as weight gain, slower heart rate, fatigue, more frequent and stronger menstrual periods, forgetfulness, dry skin and hair, hoarse voice and intolerance to cold. In addition, hypothyroidism is often accompanied by an enlargement of the thyroid gland known as goitre.

Who is affected by thyroid disease?

On a worldwide scale, approximately 200 million people have some form of thyroid disease. People of all ages and races can get thyroid disease. However, women are 5 to 8 times more likely than men to get problems with their thyroid function.

There are various different factors causing hyper- and hypothyroidism.

The following conditions cause hypothyroidism:

Thyroiditis is an inflammation of the thyroid gland. This can lower the number of hormones produced.

A special form of thyroiditis is Hashimoto's thyroiditis. This is a genetic disorder caused by diseases of the immune system and can be passed from one generation to the other. In addition, thyroiditis can occur in women after giving birth also referred to as postpartum thyroiditis. It is usually a temporary condition and occurs only in 5-9% of woman giving birth.

Nutrition also impacts your thyroid functions. Iodine deficiency can cause hypothyroidism. This is a worldwide problem affecting approximately 100 million people. As mentioned earlier, iodine is used by the thyroid gland to produce hormones.

The following conditions cause hyperthyroidism:

Thyroiditis (inflammation) can also cause the opposite and trigger the release of hormones that were stored in the thyroid gland. This uncontrolled release of thyroid hormones causes hyperthyroidism for a few weeks or months. It may occur in women after childbirth.

In contrast to iodine deficiency, excessive iodine intake may have negative effects on your thyroid. Excessive iodine is found in a number of drugs such as Amiodarone, Lugol's solution (iodine) and some cough syrups. This might cause the thyroid to produce either too much or too little hormone in some individuals.

How can I promote the health of the thyroid gland?

Iodine is most essential to maintain a healthy thyroid. Iodine is the critical ‘ingredient’ for the production of thyroid hormones. We don’t need a lot of iodine, it is said that “one teaspoon of iodine is enough for a lifetime”. Nonetheless, the daily and constant supply of this micronutrient is important. Too much iodine at once is counter-productive and causes your thyroid to produce less hormones. The best way to get your daily dose of iodine is through eating healthy foods like seafood and dairy products. In addition, iodized salt is a good source and you can use it to season your food. Nowadays, iodine is added to salt to combat goitres (caused by hypothyroidism). Regular testing of the thyroid gland is very important in identifying the effectiveness of the thyroid.

Blood tests such as thyroid profiling, can assist in identifying changes in thyroid hormones. TheChemistLive offer at home and in-clinic Thyroid testing. Visit our store to purchase your test kit or book in directly.

CONTACT
210 Bury New Road
Whitefield, Manchester
Greater Manchester
M45 6GG
Contact Us
0161 543 6622
INFORMATION
Premises GPhC Number:
9011397
Superintendent Pharmacist
Muhammad Rafiq (2217138)
OPENING HOURS
BRANCHES
See All Branches
Cookie Policy
Privacy Policy
Terms And Conditions
Local Shopping Policy
Copyright 2023
Powered by www.thepharmacycentre.com
and www.medicinechest.co.uk
We were unable to connect you to our system.
Please click to try again.
If this problem persists contact info@thepharmacycentre.com
This website is no longer available, If you are the pharmacy owner, please contact The Pharmacy Centre to re-activate.
Don't show this again
Don't show this again
MENU
Main Menu
No Results
Pages
Shopping Categories
More Categories
In Store Shopping
More Products
Online Shopping
More Online Products
Health
Search Health Articles...
Search Medicines...
Coronavirus Advice
Admin Tools
Settings
Volume
Text
Device
Your Basket
In Store
Total
Checkout
Online
Total Excl VAT
VAT
Total
Checkout
Live Chat
Live chat is currently disabled. Toggle the switch to make yourself available for live chat.
Active
Pending
Type your message and press enter to send, An administrator will reply to you shortly
Chat...
Send
End Conversation
Back to Chats
Please select a branch to view orders, patients and history...
Website
BeWell Console
Select Branch
Order In
Patient Orders
Pending Orders
Complete Orders
Order History
Patients
Register Reminders
Statistics
Configure
Log Out
Speciify which content you wish to enable on your site
Flu Pages & Content
Medic Spot Covid Test Pages & Content
Medic Spot Travel Planner
Online Doctor Pages & Content
Testimonials Pages & Content
Travel Clinic Pages & Content
Appointment Booking Pages & Content
Back
Next
What do you want to do?
Visit the website home page
Visit the website page for my pharmacy
Change my pharmacy
Back
Next
1
2
3
4
5
6
7
8
9
10
11
12
13
14
15
16
17
18
19
20
21
22
23
24
25
26
27
28
29
30
31
Back
Next
Please provide your email address you use to login to your account, we will then send you a password reset code.
Email
Back
Next
Back
Next
The following list shows all the items you have placed orders for, click on an item to see all the dates you have placed an order for the item.
Back
Next
Please provide a little more information to finish setting up your account...
Which of our stores you use
Are you registered for GP online services?
The surgery you are registered with
Are you exempt from prescription charges?
A contact telephone number
Your home address
Messages
No new messages
Important: Your record may contain sensitive information. If someone is pressuring you for this information, contact your GP surgery immediately.
Your surgery does not currently allow you to place orders via GP online services. Please contact your surgery to resolve this or click here to unlink.
Online prescription ordering is not currently enabled for your branch. You can still store your items and set reminders to re-order.
You haven't set up any reminders to reorder your prescription items. Click here to setup reminders now
Your recent prescription orders
What do you want to do?
Change User
Order
Manage
Pharmacy
History
Purchases
Log Out
Please enter your login details to access your account...
Email
Password
Keep me logged in
Help! I have forgotten my password
Back
Next
To keep your password secure you will periodically need to change it. Please provide a new password to login to your account.
Email
New Password
Back
Next
If you have an NHS account you can use it to login to your account. By doing so we can automatically collect information required to connect to your GP online.

You will need to give NHS login consent to share your information with us for the purposes of creating your account with us, ordering repeat prescriptions, sending your GP a message and seeing the health information your GP shares with you